skip to main | skip to sidebar

We're listening to the post-game show on the radio. As can almost be expected now, someone called in to player-hate on Jared Jeffries. The caller asked those same tired questions, "Why is this guy a starter? What does he contribute?" Here's your answer player-hater: Jeffries brings some D to a team that sorely needs it. He blocks shots and gets steals. He understands his team won't win by just trying to outscore the opponent. There have to be some stops on the other end of the court.
Posted by dc gal at 9:13 PM No comments: Links to this post

We've reached 5,000 hits on our shop this week. Thanks to all of you who've visited and shopped.
Posted by dc gal at 9:11 PM No comments: Links to this post

MPD has posted Winter Holiday Safety Tips. Take a look and be safe this holiday season.
Posted by dc gal at 10:01 PM No comments: Links to this post

Wizards' losing streak is OVER!

Our Washington Wizards won last night in double overtime 120-114 on the road. They served the Detroit Pistons with their 2nd loss for the season.

How they'd do it? They played great defense, including coming up with 36 defensive rebounds. They had amazing production from the bench. Butler had 27 points, making key free throws in the 2nd OT. Atkins scored 20 before fouling out in the 4th. And they had a little help from the opposing team who missed a couple of critical shots.

Go Wizards! DC is cheering for you.
Posted by dc gal at 12:00 AM No comments: Links to this post

Our Washington Wizards have dropped 5 in a row. Ouch. Tonight's game is against Detroit, probably the most difficult team to beat in the league right now. The whiz kids' chances to end their losing streak aren't looking good.
Posted by dc gal at 11:54 PM No comments: Links to this post

What happened to our Washington Wizards?

Last season our Washington Wizards dazzled us. Winning the first playoff series for the franchise in decades.

At the start of the season, it looked like they had picked up where they left off. But now despite a smokin' offense, the wiz kids have dropped 4 in a row. That makes us sad. We hope the Wizards will focus on defense, defense, defense because we're saving up for our playoff tickets.

What do you think the future holds for our hometown basketball team? When will we get the next W?
Posted by dc gal at 9:39 PM No comments: Links to this post

We were surprised to see we got a mention on DC Blogs yesterday.
Welcome DC Blog readers and visit again soon.
Posted by dc gal at 11:12 AM No comments: Links to this post

Free Shipping on orders over $50

Sit back and shop our popular designs on hot items including apparel, mugs, and stickers as well many exciting new buttons and magnets! VisitBest of Washington DC T-shirts and Gifts and give an original gift to everyone on your list.

Shopping at Best of Washington DC T-shirts and Gifts is easy and hassle-free with a guarantee that includes 30-Day 100% Money Back on all returns.

If you buy over $50 in goodies, Super Saver Shipping is FREE! Coupon code is FREESHIP. Hurry offer expires December 6, 2005.

Shop now and be done with your holiday shopping early!
Posted by dc gal at 11:07 PM No comments: Links to this post

Vehement opposition to the a DC commuter tax both amazes and puzzles. DC residents deserve the same rights as other American citizens. If the city leaders of any other city in this country wanted to impose a commuter tax, they could do so. The District should be no different.

As the capital city, DC has expenses and funding challenges that other cities don’t face. DC can't collect property tax on the vast holdings of the federal government here. Nor does DC receive property tax from many of the nonprofits located here because DC is the nation's capital. DC has higher security costs because of its status as the capital. And those are just a few examples. For those who oppose the commuter tax, how would they propose that DC fund its additional costs related to its unique status as the nation's capital.

Check out our shop.
Posted by dc gal at 9:42 PM No comments: Links to this post

Commissioner William Boston held ANC 5A07's monthly meeting tonight. Unlike the rambunctious meetings we had over the summer during the historic preservation controversy, the session was uneventful.

Dee Smith from Councilmember Vincent Orange's office was present and took notes on the community's concerns. That seemed a bit unusual as I cannot recall having seen her at previous 5A07 meetings. Ms. Smith seemed genuinely interested and available to help residents. When she addressed the residents, she mentioned that the councilmember has an e-newsletter. (Who knew?) Someone asked why it isn't posted to the Brookland yahoo group. Ms. Smith handed the questioner her notebook to record the group's e-mail address.

The meeting for all of ANC 5A is 7PM tomorrow Wed. November 16 at Thurgood Marshall in Fort Lincoln. Development in that community is on the agenda.
Posted by dc gal at 11:39 PM No comments: Links to this post

Ok, we're totally off-topic today. This weekend we're watching NBA basketball and the conversation turns to who is the NBA's most attractive player. To the DC T-shirt Lady's surprise, everyone else agreed that Allen Iverson deserved the title. Someone even said if we were to ask most women, they'd agree it's AI hands down. Do you agree? If you don't, tell us your pick.
Posted by dc gal at 8:22 AM 2 comments: Links to this post

New! We have ornaments, magnets and buttons 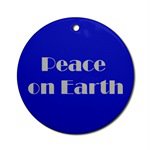 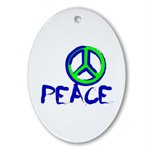 We now have peace ornaments, magnets and buttons.

Posted by dc gal at 9:05 PM No comments: Links to this post

An Official Fruit for DC?

According to The Washington Post, council chair Linda Cropp wants DC to have an official fruit. She's asked school children to come up with suggestions. Apparently, her stipulations are "apple" is already taken by NYC and it can't be a council member. The latter took away our recommendation. Oh well.

What do you think DC's official fruit should be? Let us know.
Posted by dc gal at 11:38 PM No comments: Links to this post

Lonnie, who posts comments to the In Shaw Blog, is a like a muse. Here's another quote from Lonnie followed by some commentary by yours truly.

Historically in DC, the original white flight was associated with the desegregation of schools. The 1954 desegregation of DC's schools far pre-dated the riots. The whites who fled DC to avoid sending their children to integrated schools were not forced out. They chose to go.
Posted by dc gal at 10:26 PM 1 comment: Links to this post

Okay, the quote is from a comment posted today on the In Shaw Blog.
"If you're forced out, you just have to deal. There're plenty of affordable areas just a couple of miles away anyway. What's the problem with that?"

There are lots of problems with that. First, affordable areas aren't always "just a couple of miles away". The individual or family that's forced out may end up a good distance from their original home. Second, residents who are forced out aren't just leaving their home. They're leaving everything that makes up the fabric of that community: from the friends and neighbors they socialized with to the schools, classmates, and teachers their children cared about. Finally, the community loses whatever the residents contributed. Things that newer residents may or may not provide.

Yes, neighborhoods change. It's part of the cycle that cities go through. City dwellers have to accept that part of urban living. These changes usually bring both good and bad. When the people who kept the community going during less prosperous times are priced out, that's definitely bad.
Posted by dc gal at 8:32 PM 5 comments: Links to this post

Washingtonian Magazine continues to smash the myth that Washington has a shortage of Beautiful People. Click here to help the mag find those great-looking guys and gals.

Enhance your own good looks. Wear our gear.
Posted by dc gal at 8:28 PM No comments: Links to this post